We’re proud to announce that Nel’s CEO Jon André Løkke has, as the President of Hydrogen Europe, written the foreword for Hydrogen Europe’s report on COP26.

You can read his foreword in full below. 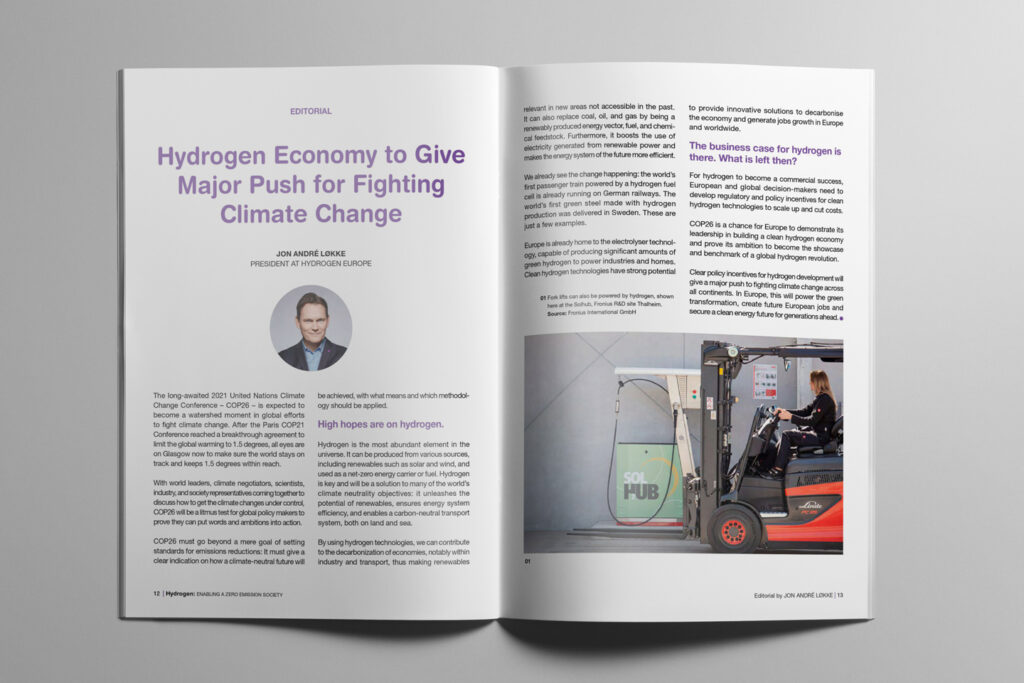 Hydrogen economy to give major push for fighting climate change

The long-awaited 2021 United Nations Climate Change Conference – COP26 – is expected to become a watershed moment in global efforts to fight climate change. After the Paris COP21 Conference reached a breakthrough agreement to limit the global warming to 1.5 degrees, all eyes are on Glasgow now to make sure the world stays on track and keeps 1.5 degrees within reach.

With world leaders, climate negotiators, scientists, industry, and society representatives coming together to discuss how to get the climate changes under control, COP26 will be a litmus test for global policy makers to prove they can put words and ambitions into action.

COP26 must go beyond a mere goal of setting standards for emissions reductions: It must give a clear indication on how a climate-neutral future will be achieved and with what means.

High hopes are on hydrogen

Hydrogen is the most abundant element in the universe. It can be produced from various sources, including water, biomass, solar and wind energy, and used as an environmental-friendly source of energy or fuel. Hydrogen has strong potential to become a solution to many of the world’s climate neutrality objectives: it unleashes the potential of renewables, ensures energy system efficiency, and enables a carbon-neutral transport system, both on land and sea.

By using hydrogen technologies, we can contribute to the decarbonization of economies, notably within industry and transport, thus making renewables relevant in new areas not accessible in the past. It can also replace coal, oil, and gas by being a renewably produced energy vector, fuel, and chemical feedstock. Furthermore, it boosts the use of electricity generated from renewable power and makes the energy system of the future more efficient.

We already see the change happening: the world’s first passenger train powered by a hydrogen fuel cell is already running on French railways. The world’s first zero-emission hydrogen-powered aircraft is planned to be put into service in the next decade. These are just a few examples.

Europe is already home to the electrolyser technology, capable of producing significant amounts of green hydrogen to power industries and homes. Clean hydrogen technologies have strong potential to provide innovative solutions to decarbonise the economy and generate jobs growth in Europe and worldwide.

The business case for hydrogen is there. What is left then?

For hydrogen to become a commercial success, European and global decision-makers need to develop regulatory and policy incentives for clean hydrogen technologies to mature and develop.

COP26 is a chance for Europe to demonstrate its leadership in building a clean hydrogen economy and prove its ambition to become a birthplace of a global hydrogen revolution.

Clear policy incentives for hydrogen development will give a major push to fighting climate change across all continents. In Europe, this will power the green transformation, create jobs for Europeans and secure a clean energy future for the generations ahead.